A Brief History of Human Rights

The decrees Cyrus made on human rights were inscribed in the Akkadian language on a baked-clay cylinder.

In 539 B.C., the armies of Cyrus the Great, the first king of ancient Persia, conquered the city of Babylon. But it was his next actions that marked a major advance for Man. He freed the slaves, declared that all people had the right to choose their own religion, and established racial equality. These and other decrees were recorded on a baked-clay cylinder in the Akkadian language with cuneiform script.

Known today as the Cyrus Cylinder, this ancient record has now been recognized as the world’s first charter of human rights. It is translated into all six official languages of the United Nations and its provisions parallel the first four Articles of the Universal Declaration of Human Rights. Cyrus the Great, the first king of Persia, freed the slaves of Babylon, 539 B.C.

The Spread of Human Rights

From Babylon, the idea of human rights spread quickly to India, Greece and eventually Rome. There the concept of “natural law” arose, in observation of the fact that people tended to follow certain unwritten laws in the course of life, and Roman law was based on rational ideas derived from the nature of things.

Documents asserting individual rights, such as the Magna Carta (1215), the Petition of Right (1628), the US Constitution (1787), the French Declaration of the Rights of Man and of the Citizen (1789), and the US Bill of Rights (1791) are the written precursors to many of today’s human rights documents. 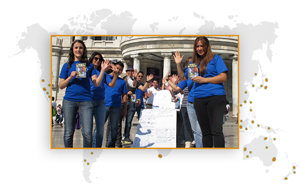